An upcoming book written by Matthew Bishop and Michael Green coins the term for the latest wave of do-gooders: philanthrocapitalists.

Bishop and Green recognized that donors such as Bill Gates and Bill Clinton are redefining philanthropy, formerly a one-step action of charitable giving, into a business-style model of accountability and results.

Appropriately timed for the September book launch, two recent examples of philanthrocapitalists illustrate why controversy can emerge when individuals enter the advocacy space with past political ties and partisan views

Earlier this month, T. Boone Pickens, founder and chairman of BP Capital Management, announced his intent to reduce the United States’ dependence on foreign oil. He’s referring to this agenda as PickensPlan, which advocates a mixed use of wind, solar and natural gas energy. This plan, laid out in graphics and charts for easy public consumption, is accompanied by a myriad of traditional ad buys and media tours.

Also bolstering this campaign is a well-run social media operation including a social network, Twitter, Facebook, MySpace and YouTube. Pickens is a well-known conservative. However, he — or his agency — has obviously learned from his liberal counterparts as he attempts to make foreign oil dependence a top issue in this fall’s election.

The PickensPlan appears to be a social and traditional media home run, but the long-term impact of the plan remains to be seen. Can a lifelong oilman known for flying on a $60 million Gulfstream private jet genuinely advocate for alternative energy?

Perhaps his past and current positions illustrate a strong change in the wind, as the United States recognizes the need for increased wind, solar and natural energy. Or perhaps not: as Pickens has noted, “There are no [wind] turbines on my ranch, because I think they are ugly.” 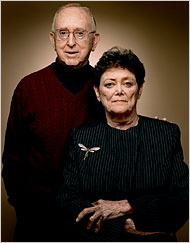 Earlier this year, ProPublica, the brainchild of San Francisco entrepreneurs-turned-philanthropists Herbert and Marion Sandler, opened its doors, declaring, “Investigative journalism is at risk.”

Led by Paul Steiger, the former managing editor of The Wall Street Journal, ProPublica claims to be a non-partisan, non-ideological shop, taking on investigative journalism pieces such as its recent 60 Minutes partnership, which examined the U.S.-financed Al Hurra.

Some argue that investigative journalism is a luxury that the modern newsroom cannot afford; thus, it makes sense for a non-profit to fund the activity. Others point to the Sandlers’ financial resources, amassed from years in the mortgage and loan industry, and wonder if ProPublica’s critical investigative eye will examine its own funding source.

Also interesting is the Sandlers’ relationship to ProPublica. Unlike contemporaries who attach family surnames to their non-profits, the Sandlers tend to shy from the public eye. Does this translate into less involvement in the day-to-day running of ProPublica, or can the public expect left-leaning investigative journalism pieces that reflect the funding family’s history of Democratic Party support?

It’s hard to argue with wealthy people using some of their riches to support public-minded initiatives. But the credibility of the new philanthrocapitalists may hinge on whether their ventures truly act in the public interest or merely serve as vehicles for personal ideological passion.