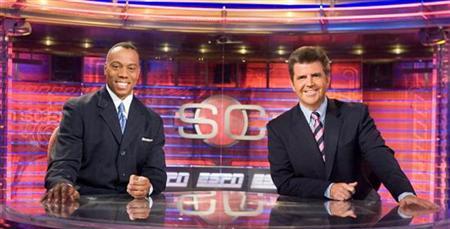 Keep smiling guys, it's all good..

Quite the fuss over ESPN in the social media world the last couple of days, huh? NBA analyst Rick Bucher spilled the beans on Tuesday night by tweeting that the network had sent out a company-wide memo about tweeting being prohibited unless it “serves ESPN,” and there was a large social media outcry yesterday about the idea being absurd. Instead of the MIA, don’t-want-to-get-ourselves-in-deeper-and-add-gas-to-the-flame-by-responding route, ESPN chose to man up.

Company publicist Nate Smeltz (@Nate_ESPN) replied to Mashable reporter Jennifer Van Grove (@JBruin) on Twitter with an official statement in two tweets (here and here) and promptly emailed the official ESPN social media policy to giant sports blog The Big Lead, disclosing the guidelines for all to see. Then the network followed that up by offering Van Grove the chance to interview ESPN editor-in-chief Rob King (@RFKing) about the policy and controversy around it, the result being this post. I dunno, but all this sounds pretty social to me.

You can read the policy in its entirety in the Mashable post, but I understand where ESPN is coming from; it wants to protect itself in a time when companies’ reputations can and are being damaged by one simple click of the send, update, post or upload button – especially given all the sports-related social media controversies lately (i.e.; Erin Andrews, Chad Ochocinco vs. Mark Schlereth, Kevin Love, Antonio Cromartie, JR Smith, etc.).

One of the most controversial points in the policy was the “personal websites and blogs that contain sports content are not permitted” point. ESPN is so successful because of the individual personalities that they’ve been lucky enough to have, and that have been lucky enough to have ESPN – the latter part being key. No employee is bigger than the company (sorry, Bill Simmons – I do love your blog), but I don’t think that all employees should feel like they’re on a corporate leash quite yet. I’m just saying let’s see what happens; I bet ESPN plays it by ear and becomes more lenient over time. When an anchor is fired over tweeting about their own personal blogging, then we can revisit the situation, but until then, ESPN brass were ultimately concerned about the company in a world where social media are growing larger everyday and some employees updating carelessly could put the company at jeopardy.

Here is one of my favorite quotes from King in the Mashable post:

“In certain ways a policy suggests a restriction, or a change – we really tried to phrase them as guidelines, we genuinely believe that this is an evolving process – subject to interpretation – but we wanted this to be about what you can do and not what you can’t.”

So they’re admitting that they’re learning; not claiming that they know everything and that this policy is set in stone for all of eternity. Stepping up the way they did was (insert “came through in crunchtime” analogy).

Cash for (fill in the blank)