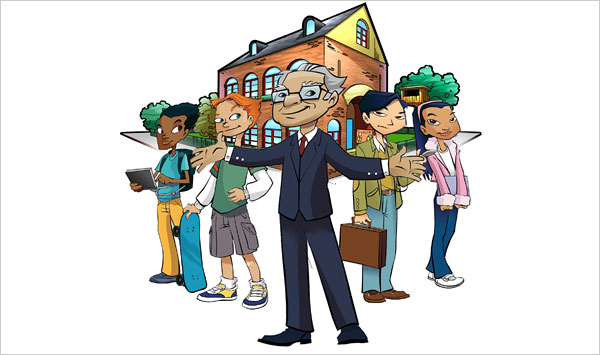 Move over, Curious George: There’s a new monkey, er, guy in town who wants to teach your kids a thing or two about responsibility. His name? Warren Buffett, and that ain’t a typing error.

The financial guru is slated to star in a new cartoon series aimed at, in his words, “helping kids learn better financial skills.” The series, called the “Secret Millionaire’s Club,” will feature Buffett mentoring a group of kids who set up a candy shop. As they embark on their adventure, they’ll learn the ins and outs of a good financial investment and even cover topics like adjustable mortgage rates.

A Squared Entertainment will produce the series and also launch additional webtoons featuring celebs like lifestyle maven Martha Stewart and supermodel Gisele BÃ¼ndchen. Stewart’s cartoon will feature a 10-year-old version of her who operates an event planning company out of a tree house, while BÃ¼ndchen’s series is about a supermodel by day and superhero by night who sets out to protect the environment.

OK, reality check. Will shows like this really shape the minds of young kids? Can you easily explain the ups and downs of an adjustable mortgage rate? Are Gisele, Buffett or Stewart, who I’m sure are not household names to the 12 and under set, really going to educate kids on important topics like the environment or finances?

My gut says the celebs they’re using resonate more with adults. To be honest, I could see myself tuning in. I mean, who couldn’t use a little coaching from the world’s second-richest person, according to Forbes. And truth be told, I’d be lying if I didn’t admit that I love me a little Martha. It’ll be interesting to see how it all shakes out. The cartoons are set to air on AOL this fall.

When the Branding Gets Tough, the Tough Quit Branding